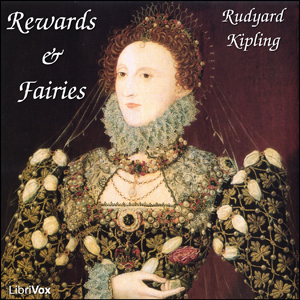 Joseph Rudyard Kipling (December 30, 1865 – January 18, 1936) (Librivox catalog search) was an English author and poet, born in India, and best known today for his children's books, including The Jungle Book, Just So Stories, and Puck of Pook's Hill; his novel, Kim; his poems, including "Mandalay", "Gunga Din", and "If—"; and his many short stories, including "The Man Who Would Be King" and the collections Life's Handicap, The Day's Work, and Plain Tales from the Hills. He is regarded as a major "innovator in the art of the short story"; his children's books are enduring classics of children's literature; and his best work speaks to a versatile and luminous narrative gift.

Dan and Una met Puck last summer, in Puck of Pook's Hill. This summer, they meet him again - and several individuals from different periods in history, who, while generally not famous themselves, tell their tales of meeting Queen Elizabeth, Francis Drake, George Washington, and other well-known historical figures. Sadly, Dan and Una forget these encounters as soon as they are over, but the reader can enjoy them for years to come! (Summary by Wikipedia and Catharine Eastman)

Uploaded by librivoxbooks on August 8, 2007